Yet another awful bento picture

For those who worry, my finger is doing much better. The cut on my knuckle is pretty much healed, so it looks like I have two stitches for no good reason. The cut on my finger... Kinda gross still, but healing. I get the stitches out on Friday. I put pictures up. They're at the bottom. So... If you don't want to see gory-ish pictures of my hand, don't scroll all the way to the bottom.

I haven't had much occasion to make bentos lately. I've been working evenings and I try to eat before I get to work. But I worked all day today, and I needed lunch. 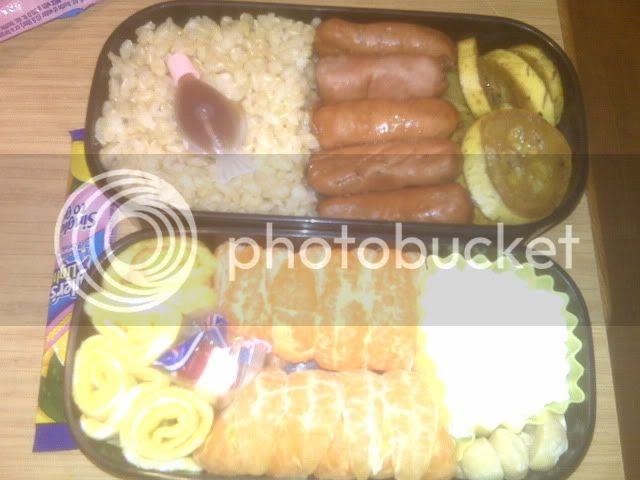 Top layer is short grain brown rice, which I loves, and a fish full of liquid aminos. I sliced a whole summer squash and steamed it with salt and pepper. And the cute little wieners on top are turkey 'lil smokies. I'm quite a fan, as they have 2/3 less fat than the regular ones. Therefore, my ban on the 'lil smokies brand has been lifted.

Bottom layer contains tamagoyaki. Tamagoyaki is quickly becoming one of my favorite snacks. I add a bit of salt and pepper. That's pretty much it. I've also got a clementine orange and a mandarin orange, a mint, a cup of cottage cheese, and macadamia nuts.

And now... for those of you who like this kind of thing... a gory picture.


Don't scroll down if you have a weak stomach... 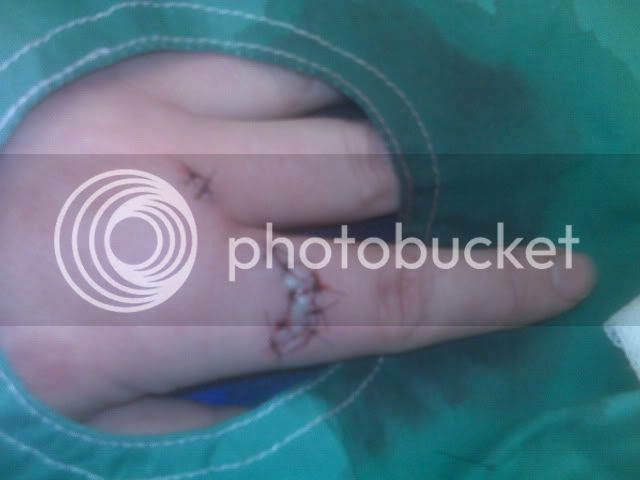 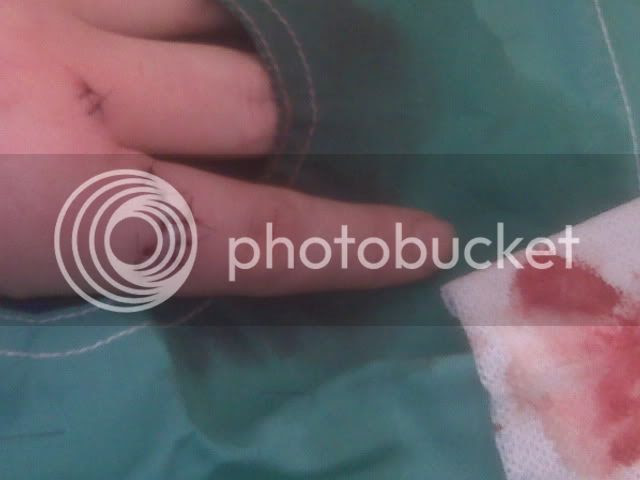 Posted by Silverwing at 7:31 PM No comments:

2 bentos. But mostly me slicing my finger open.

So I had to work 15 hours yesterday. I went to work at 6:30 in the morning. And I was tired, dang it. I had slept all of about three hours because I was coming down with a cold and my nose was burning with chemical nastiness because of an epic cleaning job I had to pull on Sunday night. ...So very tired. I pulled out my knife. My very, very sharp knife. And was cutting a piece of gaffer's tape. And the knife slipped. And there was suddenly a large amount of blood dripping from my finger. I managed to put pressure on it while still holding the knife. I was quite happy with myself. At least later. When I could think about it.

So I got to the sink, closed and put the (bloody) knife in my pocket, and turned on the water. And it so happened that there was a hose attached to the faucet. Which was curled around the bottom of the sink and then pointed straight up. For about three seconds there was a brilliant fountain of water arching up and over the 400 amp company switch. I slapped it off and grabbed the first absorbent thing I could find by the sink. It was a sketchy looking napkin, but I was dripping. And desperate.

About the time I got the napkin clamped over my finger, the guys came around the corner to investigate the water. And they found me. Bleeding profusely. Grinning at them. And asking if they had any idea where the first aid kit had gone. And they didn't. This big blue first aid kit had disappeared into thin air. So we had to bring Dan into it. We would have had to eventually. Dan is my boss. And also my best friend. Who seems to get quite upset when one of his friends is injured. He wanted to pull back the cut to see if it had gone to the bone. And he put his hand over my eyes so I couldn't see. Cuz he cares.

He dragged me to the laundry room to get some rags, as the napkin was quite red by this time. And he asked for my knife. Which was in my back pocket. I couldn't really let go of my finger... The whole bleeding thing... So I told him that if he wanted it, he'd have to get it himself. Oh. The look on his face. One of the guys happened by in their search for the first aid kit and pulled out one of theirs. I never did find out what happened to the strip Dan cut off the towel he had. I ended up with the rest of the towel somehow.

Someone showed up with the first aid kit from the boardroom. I was ordered to the office with my hand above my head while they decided how to wrap it up. On went one gauze strip... and then they pulled out the iodine and alcohol pads. I was so very thankful when they decided not to use them. Dan put on another strip of gauze and then started wrapping it in medical tape. It took all of about a minute to bleed through. Dan decided we were going to the workmed. Which was likely a very good idea. Dan made me keep my hand above my head the entire time.

So. Dan's boss met us at the workmed. He had the paperwork all ready to go when we showed up. He cracked to Dan that he could fill it out as my husband. Again. The look. He mumbled something about his wife. One of the nurses ended up filling it out while another one took the crap homemade bandage off my hand and washed the cut. And the doctor came in and stitched me up. Ten stitches. Not bad. I got a tetanus shot, a breathalizer test, and a drug test. Cuz that's what they do at the workmed.

I got Dan a coke while I was in there. Cuz he had to sit in the waiting room worrying for an hour. He told me I could take the rest of the day off. But we had left a sound guy in charge of designing lights while we were gone. And really. It didn't hurt. And I was the only one not freaking out through the whole thing. Also, I quite enjoyed the sympathy from the multitude of choreographers.

Anywho. I had prepared for the extra long day. I had a lunch bento and a dinner bento. Neither of which I ended up eating. The lunch bento was an experiment with some Philidelphia artichoke and spinach cream cheese. I made wraps with that, a leftover chicken tender, and whole wheat tortillas. I brought a Slimfast bar just in case they were gross. (Which they were.) The bottom tier of the box had a clementine orange, grapes, kiwi, tomatoes and carrots.

Dinner was leftover pecan-crusted pork tenderloin with rice and green beans. And again. The fruits and veggies, same as the other meal.

Also. I'm consistently down to 179. I'm pretty darn happy about that. Sure. It's one pound. But every little bit helps, right? I've got my elliptical set up in the living room, looking toward the tv. I just work out while I watch a show. It seems to be working out well.

I've about got my camera picked out. I thought you should know. Salvation is near. It will either be the Panasonic Lumix DMC-FX580, the Samsung TL320, or the Fugifilm FinePix F200EXR. All of them are equipped with manual aperature and shutter settings. Which will make the camera good for stage pictures and food pictures.

And it obviously got later and later as I was writing this. And therefore, less and less interesting.
Posted by Silverwing at 12:09 AM No comments: