It's that I'll spell 'Scrumptious' wrong.  I have a mini panic attack every single time I type that damn word.

They actually loaded out on Wednesday night.  By which time I had 36.75 hours for the week.  This didn't stop me from taking a freelance gig on Thursday and Friday.  Because I get bored when I'm not working.  And I need the money.

My first issue is that I need some massive dental work done.  ... I look like a hobo right now.  Due to unfortunate circumstances, I need an implant and a few crowns.  And those babies aren't going to be cheap.  But, you know, then my face will be fixed and I'll have, to quote my oral surgeon, 'a movie star smile to go with my movie star eyes.'  Yeah.  He totally said that.

And then I found out last week that I need new tires on my truck.  Something about them being so cracked around the sides that they don't want to top off the air in them for fear they'll explode.  ...I love my truck, but I really should have taken a better look at it before I bought it...  Truck tires aren't cheap, although I may go to the Pick'n'Pull to see what I can dig up.

Oh.  And Christmas is coming.  And I already started getting gifts for the entire clan, so I can't back off and just get them family gifts now.  It's too late.

This week holds another 'Nutcracker' for me.  And NIMS training, because if something goes down around here, my theatre becomes the morgue, and I a morgue attendant.  Ew.  And hopefully a bit more freelance work over the weekend.  Busy, busy... but that's how I like it. 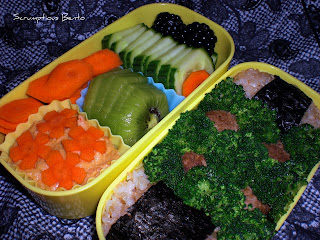 For your enjoyment... or mine... I guess... I've packed turkey meatballs with broccoli and two onigiri from my freezer stash in the one layer, and carrots, hummus, cucumbers, blackberries, and kiwis in the other. 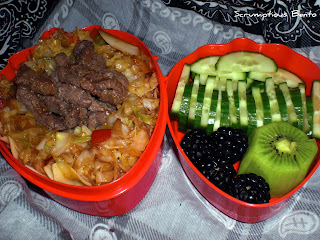 My basket last week contained cabbage, so I figured I'd make some Irish cabbage and noodles.  Which is what I did.  Just stir-fried cabbage with onion and peppers over egg noodles.  And then... I was out of Polish sausage.  And all I had that I could quickly top it with was some stir-fried beef.  Two flavor profiles that do not mix.  Lemme tell you...  Also I had lots of cucumber, kiwi, and blackberries. 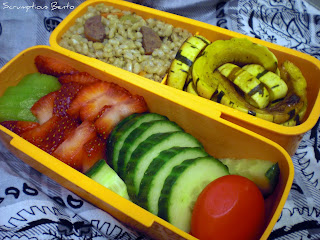 This one contains a really good fall rice casserole thingy.  Apples, onion, peppers, cinnamon, nutmeg and sausages... It's such a good mix.  I've got it coupled with roasted delicata squash.  The other layer has kiwi, strawberries, cucumber, and a babybel cheese. 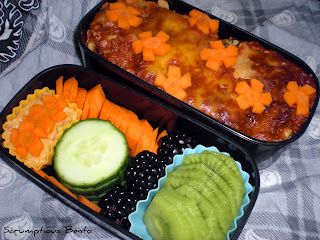 Last Sunday my little brother, who is a really good cook when he actually does it, made spinach manicotti.  Which is what that cheesy mass covered in carrot flowers is.  I've also got carrots and hummus, blackberries, and kiwi.
Posted by Silverwing at 8:46 PM 1 comment: