I took the motorcycle out today for a real-ish ride. I say ish because I don't think I should go too far before I rebuild the starter clutch, lube the shifter linkage, and bleed the clutch master cylinder. And maybe I'll do the same for the brakes. It was rather chilly. I mean sure. It was around 50 degrees today, which is nice and perfectly ride-able. But. Someone at work made off with my motorcycle/work gloves. So was making do with a pair of fingerless gloves I usually reserve for summer riding.

Next paycheck. Gloves. Saddlebags. Windshield. I hope it's a big one. The check. Not the windshield.

So. The geometry bento. Kind of. Mostly I put it together and then decided it could maybe be math related. 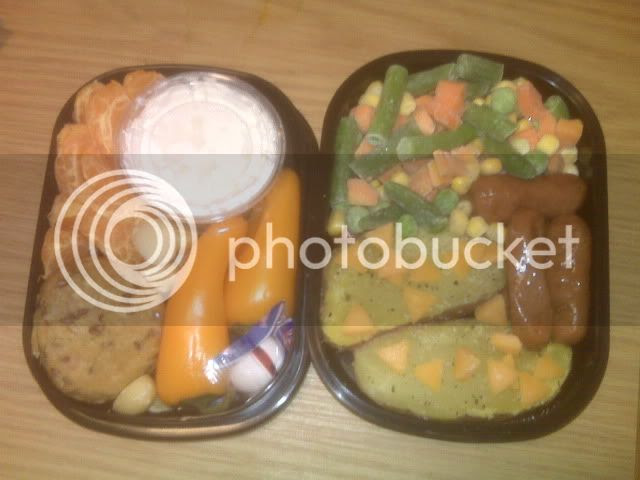 The top layer has a baked red potato topped with salt, pepper, and sharp cheddar triangle cutouts and turkey lil smokies, which I have decided look like pi. Also there are mixed veggies. The bottom has a container of cottage cheese, two mini sweet peppers, an aussie cookie, a clementine orange, macadamia nuts, and a mint.

Really I have BSed the math thing. I didn't mean for the smokies to look like pi. But I figured that matched with the triangle cheeses and the round bits in the bottom... Ok. Not so much.

Here's a picture of this box all closed up. It's one of my favorites. 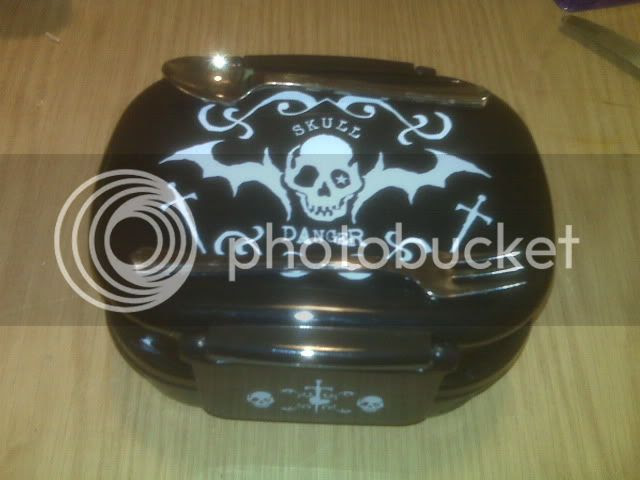 Posted by Silverwing at 8:51 PM No comments:

The quick update. I exercised yesterday. I'll do it again today. If I do eat out, It has to be a salad. And the reward is that I don't feel ill after eating a load of fried food.

And I've decided that every time I make a bento and actually eat it instead of going out, I'll be putting aside $5 for a bento purchase of my choice. Which means I need six more bentos before I can buy the newest box I have my eye on. Motivation is a wonderful thing.

No really. I did something besides shove food into a box. And I'm quite proud of myself. I did, however, learn the value of planning these things out. Mostly I got up this morning and was watching tv when I glanced over at my videos and saw the Jurassic Park logo. Click! Bento. Two hours later. I was going to run errands this morning. That didn't happen. 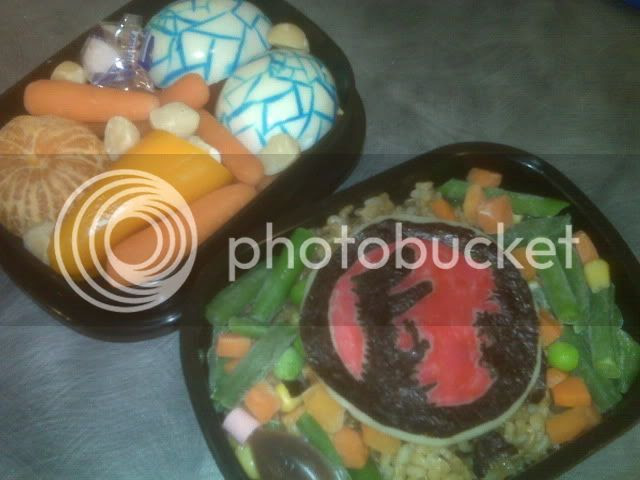 I made the logo out of nori and a slice of provolone. The red bit was colored using a food marker. It took me a while to figure out how best to transfer the image to the nori. And then I realized I had a roll of tracing paper in my art bag. So I traced the dinosaur and cut it out. I cut the nori using a really sharp steak knife like it was an exacto. It was not comfortable. I think I'll be buying a real exacto knife before I do something like this again.

A closeup. I realized just now that I didn't put the logo on there straight. The bushes should be at the bottom. 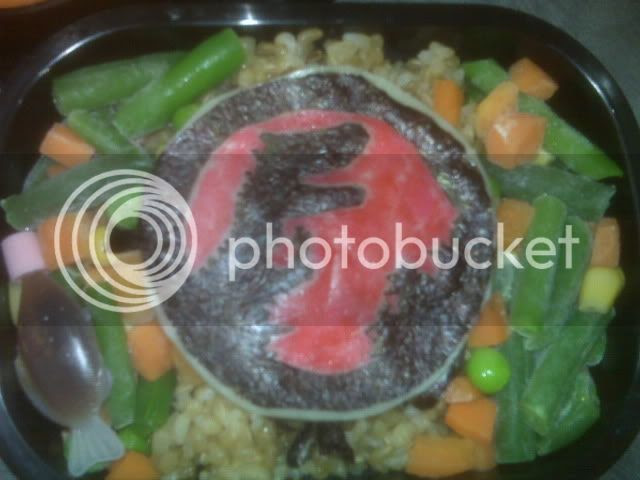 The logo is sitting atop a bed of brown rice surrounded by mixed veggies. I was going to put the hard-boiled eggs up there with it, but then realized that I'd be microwaving the rice. And microwaving the eggs would be a bad idea. Sure. I could have taken them out before microwaving. But I like having my layers separate. Cold food and hot food. It makes my life easier.

Those cute dinosaur eggs were colored with food markers as well. I tried to do them like my mom used to... crack them all over and put them in egg dye. But it didn't work out. You need to get through that little membrane that covers the egg so it will actually color. And I didn't. But the food marker worked.

The eggs are being propped up with a couple of sliced mini sweet peppers. And the orange one you see is stuffed with cream cheese. Then there are the always familiar carrots and clementine orange, with all the little spaces filled with macadamia nuts. And a mint. Because no one likes egg breath.
Posted by Silverwing at 1:42 PM No comments:

I bento. But not very often.

I ripped the brake release handle right out of my truck a few days ago. It was very 'Princess Diaries'. Except I wasn't rolling backwards down a hill. I was quite worried for a little while. I didn't think I could park the truck without automatically hitting the brake. I don't think I can buy the part anymore, and I never have time to get to the Pick-a-Part. So I improvised. I wired a nice purple ribbon onto the lever that the handle is supposed to attach to. I'm not sure it will pass inspection like that, but I kind of want to try.

I haven't been bentoing as often as I should. It's so much easier to run across to the grocery store and buy a tv dinner. I'm really trying to get into the habit though. I might start putting the money I save from bento into my piggy bank. And I'll use it to buy more bento stuff that I don't need.

Anywho. Two bentos. A snack and a full meal. 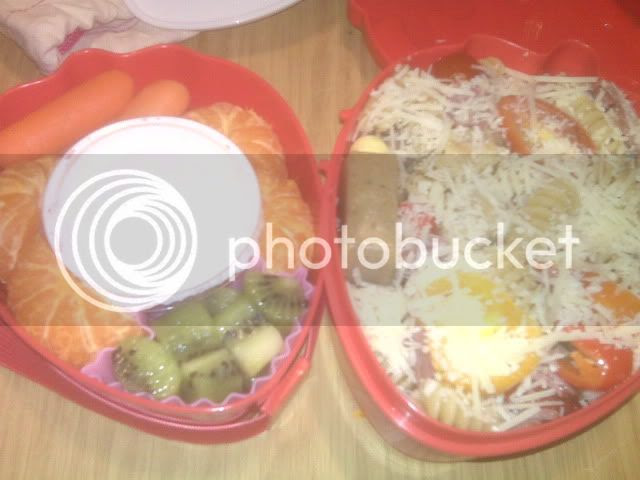 The left container has carrots, clementine oranges, kiwi, and a small container of cottage cheese. The right contains a pasta salad made with whole wheat rotini, grape tomatoes, mini sweet peppers, Parmesan, pastrami, and a reduced fat Caesar dressing. I threw in another small bottle of it to freshen it up before I ate it.

It did have a funny aftertaste that I've noticed I get a lot with my pasta salads. Maybe because I pre-sauce it? I dunno. Next time I'll try just packing the bottle of dressing. 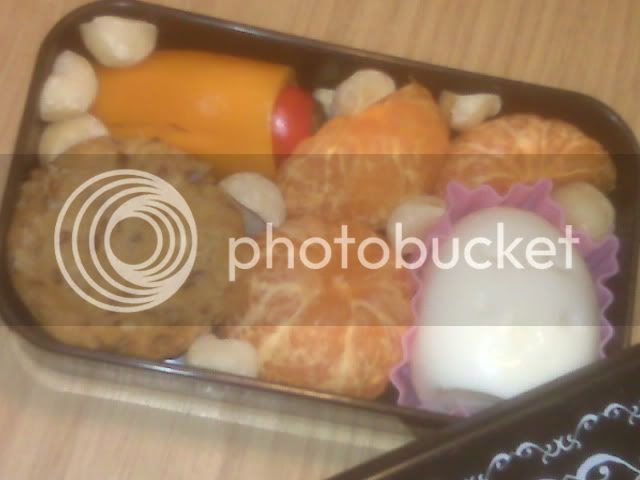 Yes. That is a mini sweet pepper stuffed with another mini sweet pepper. If I had been feeling more ambitious, I would have cut shapes out of the yellow one so the red one would show through. But it was nearly midnight. I didn't care much.

It also has a hard-boiled egg kind of shaped like a bunny, macadamia nuts, clementine orange segments, and a lovely thing called an aussie bite. It came from Costco. And it's an oatmeal cookie on crack. I recommend it.

I, of course, cannot eat a hard-boiled egg without salt. And maybe pepper. I found the perfect bento salt and pepper shaker. In the camping supplies at the grocery store. See? 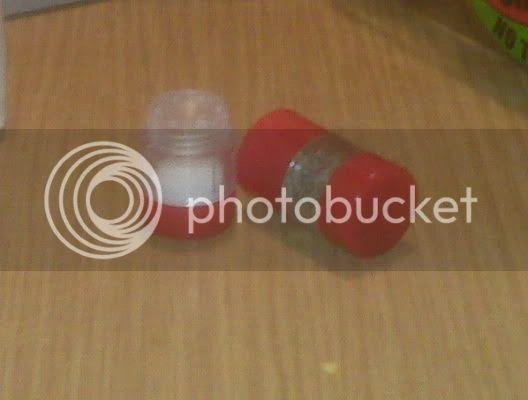 If you're wondering why I still have the cruddy pictures, I did finally decide on the camera I want. And it won't be released for another few weeks. It's the fujifilm f80exr. I think it'll be great, not only for bento pics, but for lighting pics at work.

Also. I haven't lost any weight over the last month. Likely because I haven't been bentoing. I've got to get to it though. I'm going to be getting riding leathers this spring and I want to get them at least a size smaller than I am now. Dear elliptical in the corner. I'm gonna start using you more than once a week.
Posted by Silverwing at 8:48 PM No comments: