I bought a new toaster oven.  I decided I had to.  And I know better than to argue with myself.
I live in an apartment in an old house with only one accessible, open-able window.  And the poor little AC unit I've got in it has been having a difficult time keeping the apartment cool during the recent spate of uber hot summer days.  And I like to cook.  And using the oven (which is far, far away from the AC unit) just doesn't help anything.  So I bought a toaster oven.  And I'm in love.
Not only does the toaster oven keep my apartment cooler, it means I don't feel like I have to cook big batches of things to justify the use.  The first thing I made was two cookies.  I never bake more than that, because I will eat them.  I usually just eat the raw cookie dough.  I know.  You aren't supposed to do that.  There's a warning on the package and everything.  Bite me.
The second thing I made was the Rosemary Pepper Pork Loin.  This is actually a VERY simplified recipe of my pulled pork.  Which is a recipe I will probably never share.  Everybody has that thing they make incredibly well that everybody else wants to eat/make/hoard.  The pulled pork is mine.  All mine.
*****Rosemary Pepper Pork Loin
You need:
1 lb Pork Loin, cut into 4 oz pieces
A bottle of honey
Dried Rosemary
Pepper
Salt
Preheat your oven to 350 degrees.  Line a pan with foil (unless you want to clean caramelized honey off it later) and then spray with canola oil.
This is the part where your hands get sticky...  Drizzle honey over the pork loin and smear it around until the entire thing is coated.  Sprinkle with rosemary (I like a ton, you might not), pepper, and salt.  Place on pan.  Bake for 7 minutes, turn pork pieces over, bake for another 5.  I like my pork a little teeny bit pink in the middle, or you could cook it through.
***** 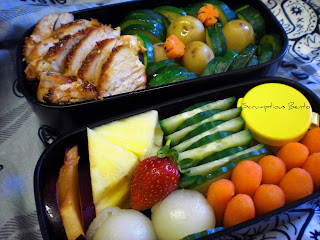 This bento consists of zucchini, the most adorable baby potatoes I've ever seen, and a piece of pork sliced over more potatoes.  I drizzled the veggies in this layer with a garlic flavored oil. It may be slightly odd, but I had to convince myself that drizzling oil was no different than buttering...

The other layer has carrots and english cucumbers with hummus (in the container), pineapple, plum slices, canary melon balls, and a strawberry from my garden!  This is not the first, but it is the first one that actually lasted long enough to get into a lunch.  I usually eat them right off the plant.
Posted by Silverwing at 9:22 AM