That is what I tell people when they look at the kitchen exploits that I'm willing to make public (we don't talk about the experiments that never had a chance past the garbage can) and they make a big deal out of them.

And I get all smug when it's something I've grown myself. 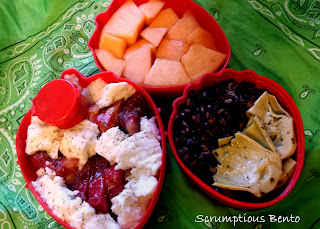 I didn't get the chance to be publicly smug about this one.  It was supposed to be a work lunch, but the client provided food, so I took it home and ate it for breakfast the next day.

It has an heirloom tomato and mozzarella salad with a dipper full of reduced balsamic vinaigrette, mixed grains with marinated artichoke hearts, and as much cantaloupe as I could crowbar into the container.  I had three cantaloupes ripen at once, and another one just a few days later that's still sitting on my cupboard.  I imagine at least one more is sitting out in the garden waiting for me to come and pick it. 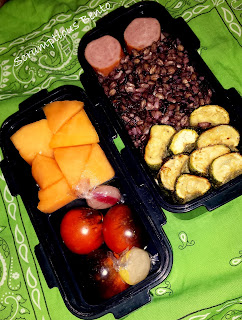 I had this one during staff meeting.  I would have felt bad, but staff meeting was held during the only half hour I didn't have to be in with client, effectively voiding out my lunch break.  For that, my coworkers get to smell the turkey sausage while we talk schedules.  Also included is more of my current mix of grains, and a pile of roasted zucchini.  The other layer has even more cantaloupe, and three heirloom snacking tomatoes with a couple of hard candies for dessert.
Posted by Silverwing at 8:40 PM